Following a resolution passed by the Cornell University Student Assembly (SA) and authored by the Prison Reform and Education Project (PREP), Cornell’s Human Resources Department expects to “Ban the Box” by July 1st, 2016 for its employees.  On Wednesday, April 20, 2016, the Employee Assembly (EA) unanimously passed a similar Ban the Box resolution endorsing and codifying the July 1st target.

Ban the Box is a nationwide campaign to remove the criminal conviction question from job applications in favor of a background check conducted after a conditional offer of employment is extended.  Ban the Box policies are on the books in seven states and over 100 cities and counties, including Rochester, Syracuse, Buffalo, and NYC.

Garrison Lovely ‘16, President of PREP reacts, “I’m thrilled that Cornell has committed to banning the box for its employees.  PREP has pushed for Ban the Box at the local level since the spring of 2015.  I met with Allan Bishop, Cornell’s Associate Vice President of Human Resources, to discuss Ban the Box in October of 2015.  At the time, Cornell was adapting its practices for its New York City components to comply with legislation that banned the box for private employers in the city.  While Allan did not express opposition to banning the box in Ithaca, it was clear to me that there were no active plans to remove the conviction question at that time.  The support this movement got, from the 125+ student signatures in support, successful SA resolution, and favorable reception from the EA, was incredible.  I cannot imagine this movement being so well received even two years earlier.  The climate around criminal justice has changed dramatically.”

PREP plans to work with Cornell’s HR department to ensure that the July 1st target is met and that the goals of the Ban the Box movement, to ensure that wrongful discrimination does not take place during the hiring process, are met by the policy changes.

PREP would like to see a Ban the Box policy similar to NYC’s passed by Tompkins County Legislature.  A policy like this would Ban the Box for all private employers within the county in favor of background checks after a conditional offer of employment is extended.  Cornell is the largest employer in Tompkins County and should act as a leader as a fair chance employer, following the example of the Ithaca City Government, which banned its box in the fall.

Longtime PREP member, Michael Alter '16, who attended the initial meeting with Allan Bishop has been involved with the Ban the Box campaign since its inception at Cornell, "The United States in general and New York State in particular have pernicious histories when it comes to prison, whether it's the process of sending people to them, keeping those people there, and after they leave prison and try to make a new life. This policy change by Cornell shows that the largest employer in Tompkins County is willing to do its part to help the people of this state and elsewhere to not have their future totally determined by their past. It also shows that Cornell's motto, Any Person, Any Study, means what it says. I was proud to help play a small part in making this change."

Director of Outreach and incoming President, Kristen Lovely '18 reacts, "I'm thrilled to see that Cornell is willing to take such an immediate action on something that has a significant impact on the Cornell campus while carrying even heavier symbolic value. Campus governance and administration is often accused of being unresponsive and ineffective, but with Allan Bishop giving Cornell a deadline to Ban the Box by, in addition to strong support by employees and the student body, PREP has been able to effect real change and I could not be prouder."

Incoming Director of Programming for PREP, Ambarneil Saha ’18 states, “Many deride reform as an inherently inadequate means of meaningfully altering the system.  By taking this pivotal step toward banning the box at Cornell, we continue to dispel this pernicious spirit of fatalistic obstructionism.  As the largest employer in Tompkins County, Cornell exerts a highly consequential effect on the dynamics of the local job market.  Banning the box at Cornell would thus precipitate a very real change in the lives of anyone seeking to re-integrate into society after serving time in prison.”

PREP Vice President, Nicholas Raskin ’16 discusses the impact of Ban the Box policies on the 70 million Americans with criminal conviction histories, “The conviction question on job applications can pose a significant hurdle to the successful reintegration of people post-conviction.  Aside from the documented discrimination that employers exhibit against qualified applicants who check the box, the box itself deters applicants from applying.  This chilling effect is hard to measure, but certainly plays a role in exacerbating the challenge of post-conviction life.”

PREP is a student organization devoted to prison reform advocacy and education that was founded in November of 2013 by Cornell students Matthew Clauson ’15 and Garrison Lovely ’16.  It has worked to educate students about solitary confinement abuses and hosted a public panel discussion about the merits of reform versus abolition of the American prison system.

We're currently participating in an advocacy campaign called "Ban the Box." Here, the "Box" refers to the question often asked to job applicants regarding previous convictions. It is PREP's stance that this practice is nothing short of discriminatory, placing an often insurmountable burden on formerly incarcerated people. Job candidates should be judged on their specific qualifications for the position at hand, and the knowledge of a previous conviction (of a nature often unrelated to the job) undoubtedly creates a bias against an applicant relative to applicants without such a conviction.

To those who believe that the criminal justice system should primarily be rehabilitative, as PREP firmly does, it is not just to make those who have served their sentence be doubly punished when trying to find a job and be reintegrated back into society. It is for this reason that we are proud to have passed a Student Assembly resolution urging Cornell to Ban the Box on its job applications.  Our plan is to move forward with similar resolutions in other assemblies (Employee, Graduate and Professional Students, University, and Faculty) and meet with Cornell administrators to make this change happen.

You can read Sun coverage of the SA resolution here: ﻿http://cornellsun.com/2016/03/17/student-assembly-supports-indigenous-peoples-day/﻿

The Daily Sun published an independent editorial supporting PREP's effort's on Monday March 21st, 2016 which can be found here: http://cornellsun.com/2016/03/21/editorial-banning-the-box-cornell-as-a-fair-chance-employer/

For more information on Ban the Box, check out http://bantheboxcampaign.org/ or reach out to any of us at PREP. 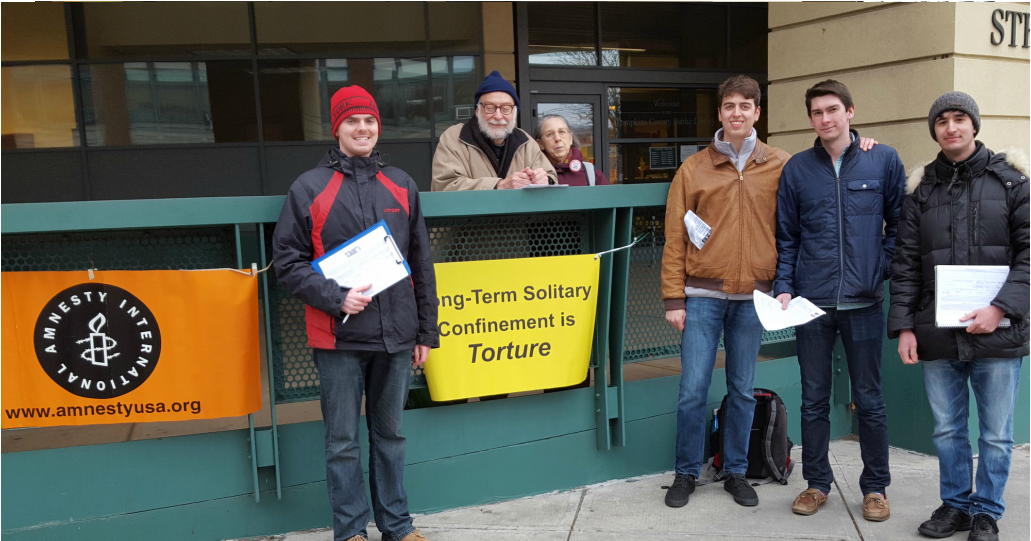 PREP is proud to support the HALT Solitary Confinement Act, currently a bill proposed in the New York State Assembly.  Details of the bill can be found here: http://nycaic.org/legislation/

The Prison Reform and Education Project (PREP) kicked off its Behind Bars Campaign on Monday with the construction of a 7 by 9 foot wooden cell in the heart of campus.  The cell was covered in facts and statistics about solitary confinement and the US prison system to educate passerbies about the abuses that occur on a daily basis.  The campaign protests overuse of solitary confinement and stimulates discussion about the US prison system within the Cornell community.

New York State (NYS) holds roughly 4,500 inmates in Special Housing Units (SHUs), a euphemism for solitary confinement.  Hundreds of these inmates are under the age of 21, and NY has the highest percentage of inmates in solitary in the US.  Solitary sentences longer than two weeks can cause or exacerbate mental illness and are generally considered by the international community as torture.  The average sentence length in New York is five months.

PREP is lobbying in support of the Human Alternatives to Long Term (HALT) Solitary Confinement Act, currently in the Committee on Corrections in the NYS Assembly.  HALT would limit solitary sentences to two weeks and expand access to rehabilitative programming to inmates in solitary.

PREP Programming Chair Amber Aspinall ’17 explains the need for awareness, “The overuse of solitary confinement is just another sign of our broken prison system. We live in a country where it is completely legal to put teenagers, people with mental illnesses, and pregnant women in small, windowless cells for days (sometimes months) on end, where it is completely legal to deny citizens basic human interactions for holding ‘radical’ political beliefs, practicing unpopular religions, or simply cursing.”